Fourteen oversized sculptures with raised hands are providing a warm welcome to Garment District visitors,  as part of the our latest public art exhibit, Here, created by artist Santi Flores.

Located on Broadway in the Garment District between 38th and 41st Streets, Here symbolizes unity, diversity and individuality, and is dedicated to all New Yorkers and visitors passing through the neighborhood. Crafted from steel, concrete and enamel paint, Flores’ sculptures vary in size, with the largest of the series towering over the streets of Midtown Manhattan at 14-feet-tall. 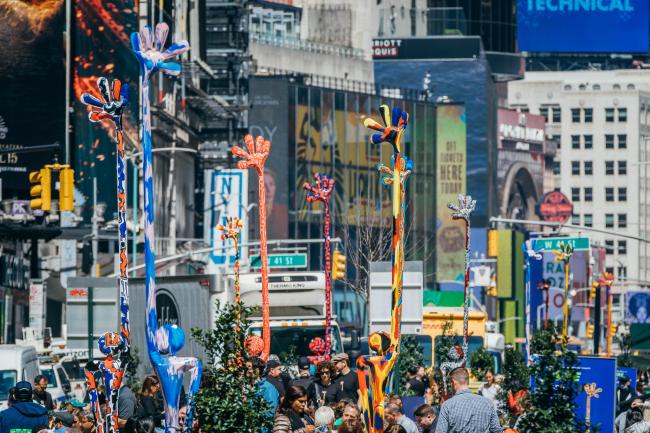 Flores is dedicating Here to local New Yorkers and visitors in the Garment District, and created the series of sculptures to instill hope as the New York City community looks toward the future. Each sculpture features the same raised hand gesture, but is unique in color and markings on their “skin” – representing the diversity and individuality of the people of New York City, while sending a message of unity. To further develop his artistic language, Flores produces his works based on his surroundings, including people, feelings, and relationships.

Flores is a plastic and visual artist and musician from Albacete, Spain. He has exhibited his work extensively at museums and galleries in New York and across the world including several cities in Spain, Italy and Germany. Flores received his superior degree from the School of Crafts of Albacete, and taught at the Albacete City Council School of Crafts. 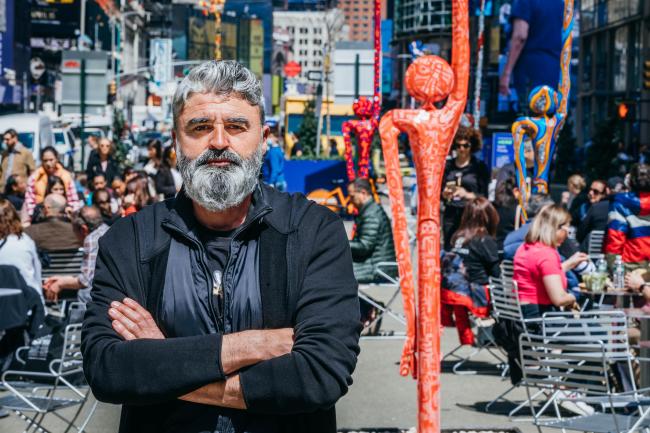 “Santi’s installation poses a powerful message about the importance of diversity and unity, which are elements that make New York one of the greatest cities in the world,” said Barbara A. Blair, president of the Garment District Alliance. “We are proud to showcase these wonderful sculptures in the heart of Midtown in the Garment District, and we encourage all to visit the exhibition, snap photos, and take in its inspiring meaning.”

The installation is part of Garment District Art on the Plazas, a year-round public art program made possible through the NYC Department of Transportation’s Art Program (DOT Art). The Garment District Alliance and DOT Art work closely to coordinate and install exhibits and individual pieces, which enhance public plazas and make them even more welcoming to New Yorkers and visitors.